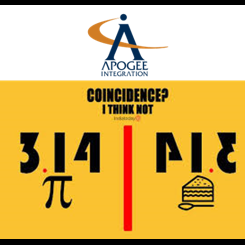 While many celebrate Pi Day, March 14, as "Pie Day" and an excuse to celebrate all kinds of deliciousness wrapped in a crust, it actually pays homage to math.
More specifically, pi, notated by the Greek letter π, is a mathematical constant that was originally defined as the ratio of a circle's circumference to its diameter, first calculated by Archimedes. That number always calculates to 3.141519 and so on, shortened to 3.14 (March 14).

Pi Day was coined in 1988 by an American physicist, Lawrence N. Shaw, who worked at San Francisco's noted Exploratorium museum to engage its staff and didn't expect it to take a life of its own, far beyond the limits of San Francisco.

For APOGEE we celebrate Pi Day with our annual Security, OCI, Discrimination and Ethics training. You should have received a link to get that done. If you would like to get some free lunch at the APOGEEPlex and utilize a workstation to knock out this training then Thursday at Noon is a great time for you to join us!

Please RSVP to the APOGEE calendar invite so we can order enough Pi(e) themed lunch items and configure enough workstations.